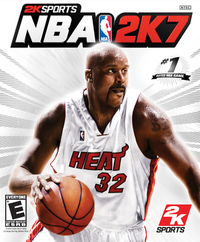 NBA 2K7 is a basketball simulation game developed by Visual Concepts, the makers of the late NFL 2K series. Along with Roster Updates, NBA 2K7 featured a revamped 24/7 mode, which allowed you to become a famous street baller, tweaks to the Association mode, like the ability to set practices for the week to increase players attributes. Shaq graced the cover for the second year in a row.

Retrieved from "https://nba2k.fandom.com/wiki/NBA_2K7?oldid=5680"
Community content is available under CC-BY-SA unless otherwise noted.