LeBron Raymone James Sr. (born December 30, 1984), also known by his initials LJ and LBJ, is an American professional basketball player for the Cleveland Cavaliers, Miami Heat, and Lakers. He got selected on October 29, 2003 for the Cavaliers and played for the team until July 2010 at which point he joined the Heat (and formed "The Big 3" along with Dwayne Wade and Chris Bosh) and lead the team two championships (in 2012 and 2013). In July 2014, James returned back to Cavs and lead the team a championship in 2016. As of July 2018, he currently plays for the Lakers. In addition to three championships, James has also four NBA Most Valuable Player Awards, two NBA Finals MVP Awards, two Olympic gold medals, an NBA scoring title, and the NBA Rookie of the Year Award. 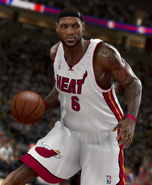 NBA 2K14.
Add a photo to this gallery

Retrieved from "https://nba2k.fandom.com/wiki/LeBron_James?oldid=7116"
Community content is available under CC-BY-SA unless otherwise noted.