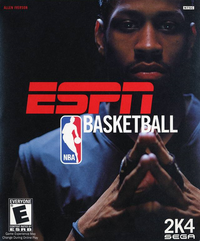 ESPN NBA Basketball is the follow up to the year before's NBA 2K3. It is alternatively known as NBA 2K4.

Using Sega's exclusive license with ESPN, the game's presented like you were watching an NBA broadcast. There are stat overlays, pre-game, half-time and end-game shows, action replays, and various other animations.

ESPN NBA Basketball has all the standard game modes, from quick game to practice, as well as additional modes, such as one-on-one and street basketball, where you can compete in a variety of games, such as being the first player to score twenty-one. It also comes standard with franchise mode, which lets you lead a team of your choice to victory (or defeat) in multiple seasons.

The newest and biggest mode of the game is 24/7, which starts you off as a nobody basketball player in a local gym. You must win matches to improve your stats (scoring two three pointers in a row will increase your long shot stat, etc.), and you have to take on "bosses" to get further. Beat a "boss", and he'll give you his cell phone number, which you can then use to call him for help if you need a partner for a doubles game.

The game introduces the IsoMotion control systems, which is designed to help you pull off certain moves. By moving the right analog stick, you can perform more advanced dekes, spins and fakes. The IsoMotion moves also have an opposite effect, and using it too much may result in you being charged with a personal.

Retrieved from "https://nba2k.fandom.com/wiki/ESPN_NBA_Basketball?oldid=5674"
Community content is available under CC-BY-SA unless otherwise noted.