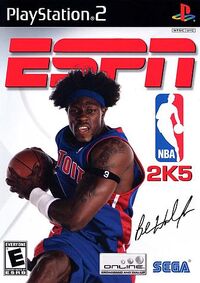 ESPN NBA 2K5 is a video game released by Sega and Global Star Software in 2004. Some modes in the game are The Association (Season of basketball), 24/7, Street basketball, Tournament, and you can unlock bobble heads and teams. The game's graphics are done by Visual Concepts. Detroit Pistons center Ben Wallace is on the cover. Wallace was the first player to appear on an NBA 2K series cover who wasn't Allen Iverson.

Retrieved from "https://nba2k.fandom.com/wiki/ESPN_NBA_2K5?oldid=5676"
Community content is available under CC-BY-SA unless otherwise noted.